It’s said to be 99.444 % safe when wearing a prophylactic during sex but then there are times when it proves to be fruitless. Well on Saturday night the USC Trojans played the Oregon Ducks in a PAC-10 game. The result was a 47-20 shellacking that the USC Trojans (6-2[3-2]) took at the hands of the Oregon Ducks (7-1[5-0]) . At this time of the season every game is essentially a must win for a team , especially those with postseason ambitions as far as a BCS Bowl appearance is concerned. But for Pete Carroll and his Trojans , a Bowl appearance is but a half measure. Season in season out theirs is the ambition to be part of the BCS national championship landscape.

Tojans’ coach Pete Carroll on the sidelines of the PAC-10 game against the University of Oregon. The USC Trojans would go on to suffer a humiliating and lopsided 47-20 loss to their conference rivals. It was the largest such defeat suffered by Carroll as a coach of the Trojans. picture appears courtesy of ap/photo/ Mark J. Terrell ………

Well unfortunately, for Carroll and his Trojans their divisional match up against the Ducks prove to one of the experiences that were it one of sexual nature it would’ve proved to be one that the Trojans would want to forget. Let’s just say the condom burst for some inexplicable reason. In this case it stemmed from the fact that it wasn’t properly fitted to the appropriate appendage. How else can one explain USC’s largest game defeat under the tenure of the coach , Pete Carroll ? To say that they played badly would be to suggest that they had a bad day at the office. Here literally, they just didn’t turn up.

Carroll’s defense gave up over 600 yards of complete offense, against a team that in essence has played somewhat inconsistently throughout the season , thus far. And the humiliation of this defeat will certainly not be lost on the detractors who’ve suggested the Trojans are an overrated team. If anything, they’ve proved this season that this has been the case.They were completely outplayed in every facet of the game by Oregon . And as the game went on ,the more one could see that there was literally no way that USC could play their way back into this game . And even if they were able to play their way back in , then there was always the thought that they would still relinquish any advantage that they’d built up.

USC gives up 613 yards and suffers the worst loss in the Pete Carroll era.

Welcome to their nightmare.

USC’s hopes for a berth in the Bowl Championship Series title game are over.

So, almost certainly, are the Trojans’ chances of winning an eighth consecutive Pacific 10 Conference title.

Both ended Saturday night at Autzen Stadium when 10th-ranked Oregon handed fourth-ranked USC its worst loss of the Pete Carroll era, a 47-20 pounding before a delirious Halloween night crowd of 59,592.

On a cold night in the Pacific Northwest, Oregon quarterback Jeremiah Masoli and running back LaMichael James chilled the Trojans to the bone with outstanding performances for the Ducks, who are in complete control of the Pac-10 race with designs on a BCS bowl game bid.

“That was a real mess,” Carroll said outside the Trojans’ locker room after the Ducks manhandled a Trojans team that was fifth in the BCS standings.

USC players appeared stunned after the Ducks rolled up 613 yards, the second-most ever yielded by the Trojans.

After being exposed in the second half of victories over Notre Dame and Oregon State, USC’s defense went from bent to broken.

The Trojans had absolutely no answer whatsoever against the Oregon Ducks at any time during the four quarters of play. They were not blindsided by this team but if anything, the Trojans were ill prepared for the demands placed on them by Oregon. They were ran ragged by a team that merely wanted the win more than USC could have wanted. And as to USC’s PAC-10 ambitions ? Well it’s gone in the wind, much like their national title ambitions. A two loss team is essentially a dead man walking. No one wants to be in their shoe ! And should USC make to a postseason bowl berth , what are they are going to say ? Oh we made it ! Well considering the USC program and the heights and achievements attained under Carroll. This loss equivocally makes a dent in their ambitions and recruiting wise ,it may well be make a potential recruit think twice . But that’s unlikely to happen as the USC program is still viewed as one of the better collegiate football programs out there. 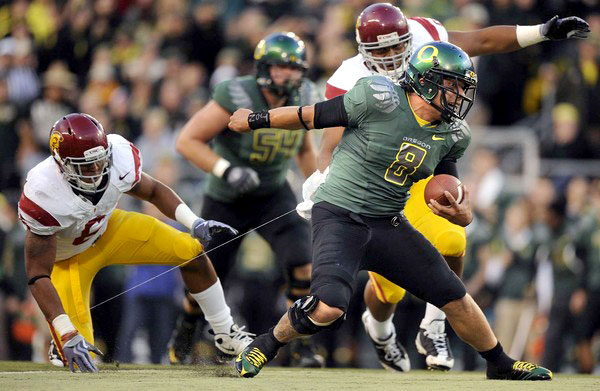 The reverberations of this loss will be felt right across the football landscape and it may well also taint the luster of the USC program . The loss was one thing but the margin of the loss ? Well that would to suggest that it was a mere slight and one could overlook it as nothing more than an aberration. But realistically, the nature of the loss was so embarrassing that I have to ask what direction is the Trojans’ program now heading in ? Is the talent there – that the Trojans are said to be recruiting ? Or better yet, is Carroll now merely thinking that Trojans’ name alone will be enough to get an athlete to peek inside the world that is the University of South California football program and be impressed what there is to see ? If that’s the case then he’s clearly misjudging the situation and quite possibly the magnitude of what this loss may well suggest.

Damien Williams of USC makes it into the endzone diving between Oregon Ducks’ players Talmadge Jackson III and John Boyett during the second quarter of the PAC-10 conference game played between the two divisional rivals. picture appears courtesy of latimes.com/ Wally Skalij ………..

There’s also one thing that I’ve always thought about the PAC-10 and in particular the schedule that UCS affixes for itself . It’s littered with games that are absolutely meaningless when they’re playing the likes of ’The Little Sisters of The Poor And Downtrodden ’. Games such as this are tawdry and are of no benefit – when they’re essentially non competitive . They , in no way test the players of USC. And what’s even worse, is the fact that many of the Trojans ’ fans look upon those games as having some meaning. But perhaps the biggest faux pas might the fact that the analysts and the idiots of the BCS actually pay attention to these games and actually think that they’re of some benefit to a program. In essence however, the BCS and its polling system is nothing more than another money making aspect of collegiate football and its already flawed system. But that’s a topic for another day and time.

Bear this in mind ,what took place on Saturday would either suggest that the Trojans’ program is on the decline . Or it may well be,there’s a lesson to be learned for Pete Carroll and his team. I for one,think it may well lie in between the two scenarios mentioned . But that’s just merely speculation on my part, nothing else mind you ! As for your own thoughts by all means chime on in with a comment. I’ll most certainly look forward to reading them and responding in kind.