Well, the NFL weekend is all but through, with the exception of Monday night’s scheduled game between the Pittsburgh Steelers (5-2) and Denver Broncos (6-1) from Invesco Field , Denver , Colorado.

Buccaneers’ quarterback Josh Freeman hands the ball off during the game played against the Green Bay Packers at Raymond James Stadium in Tampa, Florida. The Buccaneers would go on to defeat Green Bay 38-28 , being ensured of their first win of the NFL season. picture appears courtesy of getty images/ J.Meric ..
….

And as evidenced from Sunday’s slate of games for Week 9 , we now know more than ever, that the NFL is still in something of a diabolical state when it comes to several teams. There’s the good, the bad and the downright ugly ! Based on what took place between the Tampa Bay Buccaneers (1-7) and the Green Bay Packers (4-4) at Raymond James Stadium in Tampa , Florida. It was hard to extrapolate which was indeed the winless team and which team was indeed the one with ambitions of quite possibly making the postseason. Suffice to say that the game was filled with a litany of errors from either side. And the quarterback play of both teams left a great deal to be desired.

Buccaneers’ rookie quarterback, Josh Freeman did just enough to garner his first professional win in an NFL uniform. Which was much to the delight of the home fans there in Tampa. As to what this may well mean down the lines for the Buccaneers and their coach , Raheem Morris. Well, for now let’s just say with that first win of the season in defeating the Packers 38-28 . It leaves the Buccaneers with something to smile about. As to what this means for the Mike McCarthy coached Packers’ team ? Suffice to say , it’s back to the drawing board for McCarthy and his coaching staff. Their offensive line couldn’t protect quarterback, Aaron Rogers from the Buccaneers’ defensive play , much less from the H1N1 strain of the swine flu. That’s how awful the Packers’ offensive line were on Sunday !

Andy Reid ,coach of the Philadelphia Eagles and his opposite number Wade Phillips of the Dallas Cowboys meet centerfield at Lincoln Financial Field in Philadelphia after the game. The Cowboys had just defeated the Eagles in an NFC East divisional match up 20-16, to sit atop of the division with a one game lead over their rival. picture appears courtesy of ap/photo/ Craig Gentry ……

Image is everything , hype means nothing ! If that were really true then how can one explain the seemingly endless media frenzy concerning the Dallas Cowboys (6-2) and everything that this team is said to represent ? Unlike any other team in the NFL the attention paid to this team in the print format as well as on television and radio borders on the insane. Granted , that $1.5 billion monstrosity built in Arlington, creates the desired facade that this is an NFL franchise that has a great deal going for it both on and off the field. Truth be known, the Cowboys are simply nothing more than a well ran cash cow. Making money for the organization is the sole existence for Jerry Jones. And anything beyond that is considered to be a bye product of it all. The franchise seeks to get back to winning ways in terms of a postseason berth with the ultimate goal of landing a sixth Superbowl title. But that would be predicated upon them placing a winning team on the field of play. Something of which they’ve failed to do in almost a decade. 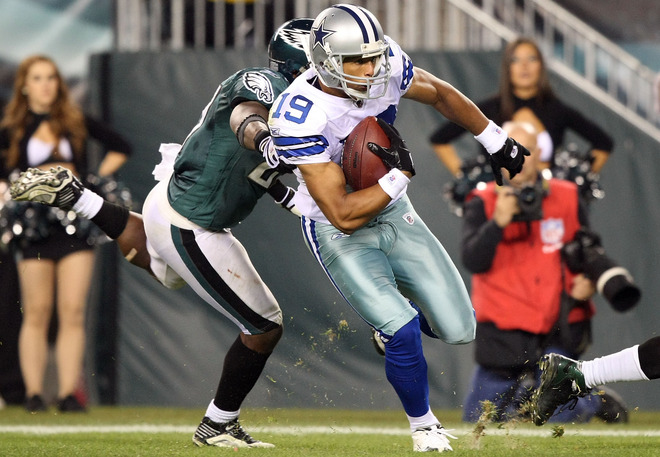 Cowboys’ wide receiver Miles Austin (19) takes it to the house , with a 49 yd touchdown reception run against the Philadelphia Eagles in the fourth quarter of the game played at Lincoln Financial Field , Philadelphia, Pennsylvania. Eagles’ defensive player Quintin Mikell (27) missed his coverage assignment of Austin in allowing the score. picture appears courtesy of getty images/Al Bello ……..

Today the Cowboys faced their arch rivals the Philadelphia Eagles (5-3) in an NFC East divisional match up, that sought supremacy within the division. And while there’s no doubt that the winner of the division has an outside shot to garner one of the top two seeds in the NFC pecking order ,come the postseason. Whether or not that team from the division can acquit themselves well enough in the playoffs, is clearly open to a great deal of speculation. Of late ,these two teams have played some great football but at the same there’s been a great deal of inconsistency to their play. Hence the reason for the statement made concerning their post-season ambitions.

Whenever the Eagles and Cowboys tend to meet. It is either under the best or worse of circumstances as to the scenario placed within that specific environment. For both coaches it has come to be the norm for gauging their teams and the coaches , themselves. At the start of the season the speculation had already began as to whether or Wade Phillips would still be in a job, were the Cowboys to have an unsuccessful season. From week to week , even during the preseason that talk was being fomented in all avenues of the press. And for the Eagles’ coach , Andy Reid , the talk there was whether or not he and veteran quarterback , Donovan McNabb were still an asset to the team and the franchise in general. Well , considering their legacy with the franchise and the success that they’ve brought during their tenure. Those who were trying to make a claim that both ought to be released clearly don’t remember the years when this team was in the doldrums.

Sunday’s game between these two stalwarts reminded us why it is that the NFC East is considered to be the best division with the NFL. The Dallas Cowboys and the Philadelphia Eagles provided us with an allout air assault with a passing game that was replete with some spectacular plays by both sets of receivers on either team. And if anything Cowboys’ quarterback, Tony Romo may well have now overcome the loss of Terrell Owens. Not that anyone is now the slightest bit concerned that he was once a former Cowboy. Now the thought is , when is the proverbial meltdown going to place in his new place of residence ? As of yet, there hasn’t been a seismic shift to indicate that Owens is about explode and unleash a tirade against the Buffalo Bills‘ organization and his Bills’ teammates. But rest assured, if the downward slide in Buffalo continues. Then you’ll definitely be hearing it , loud and clear. It’s just the way TO is !

The Dallas Cowboys managed to get their sixth win of the season in defeating the Philadelphia Eagles 20-16 , outscoring their rivals in the fourth quarter (10-3) of a relatively hard fought game. And Romo had his best game of the season so far. He was able to find 7 different receivers on the way to the team’s victory over the Eagles. And they now hold a one game lead over their closest rival , as they sit atop of the NFC East. For both the New York Giants (5-4) and the pitiful Washington Redskins (2-6). Well, things at present aren’t looking too good for either team. The Redskins are in deep turmoil and the Tom Coughlan coached Giants , now can’t even obtain a win, even if they were spotted 7 point advantage.

As we’ve now reached the midway point of the season. We’ll begin to see a push, where the legitimate contenders for the postseason will try to separate themselves from the pretenders. And the also rans , well they’re now essentially out of it. Though they could very well play ‘spoilers’ for a number of teams who still feel that they’re in with a shot of making the postseason. 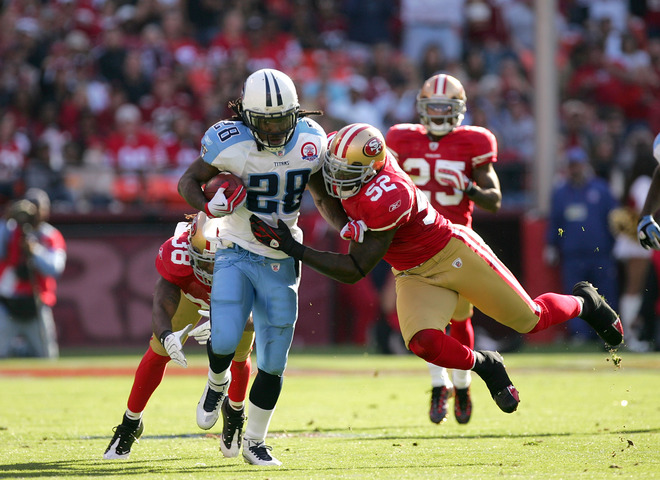 Titans’ running back Chris Johnson (28) is tackled by the San Francisco 49ers’ defensive player Patric Willis (52) during the game played at Candlestick Park , San Francisco , California. The Titans would go on to defeat the 49ers 34-27, to win their second consecutive game of the season , pushing their record in the NFL to 2-6 . picture appears courtesy of getty images/ Ezra Shaw …….

And for the claims being made by Titans’ running back Chris Johnson , that his team is quite capable of reeling off 10 straight wins to place the team amongst the thick of things. Well, it’d be a whole lot easier Chris , had you made those predictions earlier . Rather than after the Tennessee Titans (2-6) hadn’t gotten off to an 0-6 start to the season. Now you’re setting yourself and your teammates up for an even greater fall in the event of another loss. And that my friend is no laughing matter.

Whatever happens throughout the ensuing run to the end of the regular season. We will probably all remark as to the ups and downs for many of the teams in the NFL . But even more so , I think that the conversation will be about how bland and bad so many of the teams were. Parity is now being used as a misnomer for the inadequacies that’d been sought within the league. One of the problems is however, the lack of on-field talent but what’s even becoming more so, is the lack of depth in talent amongst the coaching ranks in the NFL at present. Take a look around and scrutinize the rosters of the teams with regard to the coaches and their staffs. Non too impressive to begin with , now is it ?

Click here to see the the NFL divisional standings …………………