Can Cam Newton Step Up To The Plate This Season ?

Week 3 of the NFL preseason and one doubts that there’s anymore that can be learned from the teams within the league . Certainly from a statistical standpoint as impressive as some teams appear to be there’s a great deal to be said for the fact that your starters will get their accustomed workouts but it will be the rookies who will look to acclimatize themselves with the rigors of the NFL.

Slide show for your perusal.

And perhaps nowhere will the spotlight be than upon more , than , the Carolina Panthers’ — Cam Newton as he looks justify the faith shown in him by the Panthers’ front office , and the team’s coaching staff led by Ron Rivera . And though Newton has showed his guile and athleticism there has been nothing yet to suggest that he may well be the answer to the team’s needs at the position . The player and his presumed backup Jimmy Claussen now have one more game to prove to the fans and staff in particular that they are ready to embark upon the regular season in with the right frame of mind and the ability sought , in order for the Carolina Panthers to be successful. 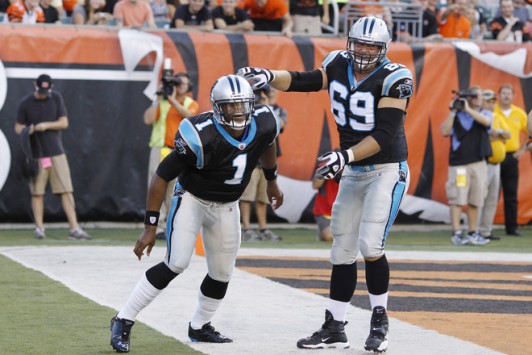 After a rather lackluster and disappointing 2010 season where the Carolina Panthers finished with a 2-14 record much to the disdain of their fans , it was felt the organization would embark upon a major personnel upheaval on both front within the playing and coaching staff. Jon Fox was seemingly allowed to depart along with several members of the coaching staff and this offseason the purge began amongst the playing personnel along with the players acquired through the NFL Draft .

As with any number one player taken in the draft a great deal is placed upon the shoulders of that athlete . They’re often seen as the presumed savior and future face of a franchise and for Cam Newton it will undoubtedly be no different. If the player can have half the success during his final year at Auburn then one could deem it a success for Cam Newton and his new teammates . Now it would be true to surmise that for any rookie quarterback starting in the NFL success isn’t expected to immediate but for the Panthers who have so much riding on the player , that anything short of an 8 win season would as such be deemed a failure for the organization . Granted , as with any team said to be going through this type of transition there will always be growing pains and a great deal of uncertainty not only about the team as a whole but also upon the expectations of the coaching staff , as well. Ron Rivera , it has to be said a rookie coach in the NFL will have his work cut out for him but with his credentials and insight into the game , one would expect the coach to fare well this upcoming season.

Unfortunately , for the Carolina Panthers they find themselves in a tough NFC South division where three of last year’s most promising teams within the conference reside . The Atlanta Falcons , New Orleans Saints and Tampa Bay Buccaneers cannot be overlooked as teams that are not capable of holding their own and being competitive in what can be best described as one of the better divisions within the NFL.

It might be at this juncture however that one now begins to question whether or not this team might be capable of usurping the dominance of their neighbors within the NFC South. I do believe that with that even with the changes on the roster , the team will be in for an arduous season ! The six games played within the division will be tough enough without considering the typical conference schedule overall for the Carolina Panthers. And ccertainly the team’s celebrated wide receiver Steve Smith will be looking to regain the form that made one of the more prolific players at the position .

It would be remiss to think that an offense led by Newton and Smith alone will be enough or for the Carolina Panthers to garner any semblance of success if this team is to show any semblance of progress beyond the mediocrity shown last season , then the team will have put forth a collective effort that is of their very best . There’s no denying that last season injuries had beset the 2010 team and as with any organization the coaching staff underestimated those losses to the roster as a whole . And it’s clear as a result of that the franchise ation believes it best to have players complemental and befitting a team that seeks the game’s ultimate prize _______ the Superbowl .

Noted veterans on this Carolina Panthers’ roster such as Steve Smith , Jeremy Shockey , Chris Gamble , DeAngelo Williams , Jordan Gross , Chris Massey and Jason Baker will have to step up if this team is to have any semblance of success over the course of this season.

By way of production shown in the preseason by the team’s young rookies the fans can expect something of note . Cam Newton , much like the players drafted alongside him by the Carolina Panthers have something to prove Albeit , that the quarterback’s own baptism of fire has been somewhat unspectacular . His rookie classmates Terrell McClain , Sione Fua , Brandon Hogan , Kealoha Pilares , Lawrence Wilson , Zachary Williams and Lee Ziemba are hoping that they too can offer something to this beleaguered franchise. If nothing else , it certainly will be interesting to see what transpires for this team as to their overall play.

For this season’s rookies in their first within the NFL this could very well prove to be an interesting year. Undoubtedly, even for the the players taken in the supplemental draft they too have something to prove . Terrelle Pryor in spite of his off field problems will have to justify the faith shown in him by the Oakland Raiders’ front office . I’d dare say that this is one gamble Al Davis might truly believe in, given his past forays with regard to over-hyped talent that simply didn’t measure up to much . With Pryor at this juncture who knows what he may well be able to offer the team ? Their travails of last season were well documented. 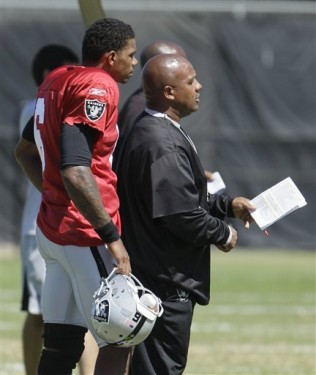 Certainly with the moves made by the organization and through the draft it has to be said the Oakland Raiders are positioning themselves to have a successful run within the AFC West and conference as a whole this season . The team certainly has the offensive capabilities to be amongst the best within the NFL and certainly within the AFC . If the team is able to reproduce that sort of form over the course the season then the Raiders’ fans could very well be for not only a wild ride but perhaps a shot of making the postseason .

Hue Jackson and his coaching staff must be hoping to get the very best out of this team . There’s enough veteran experience on the roster to suggest that Jason Campbell and his contemporaries are capable of providing enough leadership for the rookies on this team . But if there’s said to be a problem for the Raiders it has the consistent lapses by the defense in particular that of the pass defense that has let them down repeatedly over the course of last season . These are the things that John Marshall as the defensive coordinator will be lookin g to tweak over the preseason while Al Saunders will be looking to fine tune the skill-set of the team’s quarterbacks and that of the offense .

What traits do you believe Cam Newton has that may well convince you that he is capable of being a success in the NFL ? Or do you believe that he will essentially be a work in progress over the next couple of years ? And are you of the opinion that the Oakland Raiders can be a legitimate contender within the AFC West and conference this upcoming season ? Simply leave a comment on the points raised within this piece and as usual thanks for the continued support as it is greatly appreciated !

(3) CINCINNATI, OH – AUGUST 25: Gibril Wilson (27) of the Cincinnati Bengals makes a tackle against DeAngelo Williams (34) of the Carolina Panthers during an NFL preseason game at Paul Brown Stadium on August 25, 2011 in Cincinnati, Ohio. The Bengals won 24-13 . Photo by Joe Robbins/Getty Images ……

(5) Jimmy Clausen (2) of the Carolina Panthers runs away from pressure while trying to pass during an NFL preseason game against the Cincinnati Bengals at Paul Brown Stadium on August 25, 2011 in Cincinnati, Ohio. The Bengals won 24-13 . Photo by Joe Robbins/Getty Images ……

(9) OAKLAND, CA – AUGUST 28: Taiwan Jones (36) of the Oakland Raiders runs twenty two yards for a touchdown against the New Orleans Saints in the third quarter during an NFL pre-season football game at the O.co Coliseum August 28, 2011 in Oakland, California. Photo by Thearon W. Henderson/Getty Images ….

If at all interested do take time to participate in the above poll .

16 thoughts on “Can Cam Newton Step Up To The Plate This Season ?”