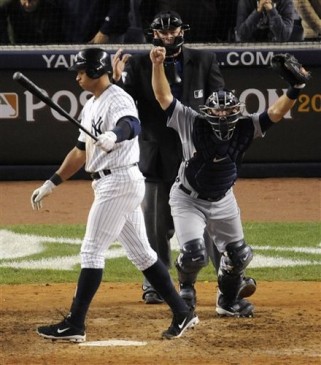 New York Yankees’ Alex Rodriguez walks off after striking out to end the game as Detroit Tigers catcher Alex Avila heads for the mound and umpire Ted Barrettt looks on, after Game 5 of baseball’s American League division series Thursday, Oct. 6, 2011, at Yankee Stadium in New York. The Tigers won 3-2 to win the series. (AP Photo/Bill Kostroun)