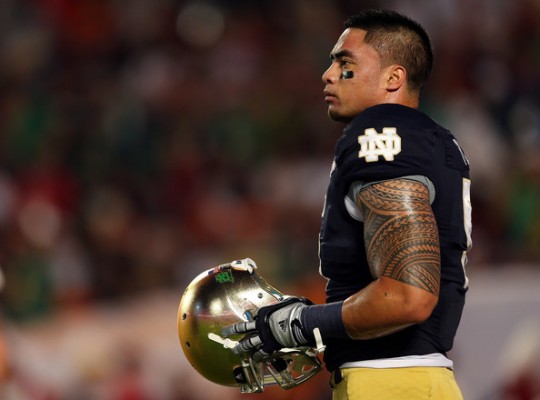 Manti Te’o (5) of the Notre Dame Fighting Irish warms up prior to playing against the Alabama Crimson Tide in the 2013 Discover BCS National Championship game at Sun Life Stadium on January 7, 2013 in Miami Gardens, Florida. The player throughout much of the Irish’s strove to fight off questions concerning his sexuality , in the aftermath of it being revealed that the alleged female he was said to be involved , in a relationship , never existed . Ronaiha Tuiasasopo , a closeted homosexual with unrequited love fomented a charade , which somehow Te’o chose to play along with , even after revelations were made that Lennay Kua was never existed . Much ado about nothing ? Or simply the possibility of a high-profiled athlete not wishing to reveal a taboo in testosterone driven sport of college football, ” where a man must be and reveal , he is a man ” . Quite frankly , there has to be male athletes within the college game and NFL who are definitely gay , but who are simply too afraid to reveal their sexuality because of the stigma that is still attached to the lifestyle within collegiate and professional sports amongst male athletes . Getty Images / Mike Ehrmann …..