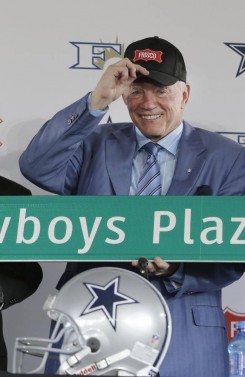 (1) Frisco, Texas, mayor Maher Masoat, left, presents a street sign to Dallas Cowboys owner Jerry Jones, center, and his son, Stephen Jones, after a new conference announcing the new home of the Dallas Cowboys headquarters Tuesday, Aug. 13, 2013, in Frisco, Texas. Frisco officials overwhelming approved a $115 million deal to build the team headquarters and a practice facility in the Dallas suburb. The agreement will end the Cowboys’ four-decade relationship with Irving, most likely in 2016. (AP Photo/LM Otero)