It’s been pretty much an offseason of discontent within the NFL with the owners , players and league hierarchy suddenly realizing that the start of the season is merely around the corner . Never mind the fact that teams haven’t really been able to conduct their OTA’s at their respective training facilities . In that respect the whole preseason and initial start of the regular season due to begin on the 8thd September could very well offer the fans a product that could be so bland and meaningless that it might have us wondering whether or not it wasn’t worth completely abandoning the season altogether . No one wants to see an on field product that by three or four three that could be so out of sync and mediocre that given the fact that the fans will be asked to pay a sizable sum to witness this all . And if as is being proposed we could very well see a preseason that will have to forgo two of the four scheduled games then any sort semblance of cohesiveness could very well be something that the fans are not liable to see at all .

Slide show for your perusal .

With that in mind of all the teams that I witnessed over the course of last season none more so than the Atlanta Falcons had me wondering how good could this team really be . Granted , their postseason foray ended somewhat abruptly but I put that down to more inexperience more than anything else . The team’s coach Mike Smith and his coaching staff seem to have found that semblance of cohesion and consistency that many teams yearn for in the league but so few are able to find it . Having won the NFC South rather comfortably, posting a 13-3 record within the league . Many felt that the team led my their Pro Bowl quarterback Matt Ryan could very well have pulled off a major surprise during the postseason. This season if anything a great deal is expected from this team and in particular by their erstwhile fans . The era of Michael Vick is long gone and but a distant and quickly fading memory . Team owner Arthur Blank and the front office headed by GM Rich McKay know that they were fortuitous not only in the hiring of Mike Smith as the team coach but also in their drafting of Matt Ryan .

I’ve no doubt that this season could very well see this team prove to be dominant but that being said I also believe that the NFC South could very well be a highly competitive division. The Tampa Bay Buccaneers , alongside the New Orleans Saints should prove to be formidable and with the Carolina Panthers no doubt looking to their overall number one pick from this year’s draft Cam Newton to simply show the Panthers’ fans what he’s made of . Who knows where the season could very well take us ?

Rich McKay and the scouting department made some prudent choices in the NFL Draft that will prove to be productive for the Falcons’ organization as a whole . And with those selections being strategically rendered with there being an assortment of offense and defense to bolster the needs of the team . The prize pick was wide receiver Julio Jones who will no doubt compliment what is already a formidable offensive presence alongside Michael Turner , Roddy White , Tony Gonzalez and Brian Finneran . And from a defensive standpoint this team can only get better as they being to gel more as a cohesive unit . But in retrospect it does all come down to have a balance on both sides of the ball and here too the Falcons aren’t necessarily lacking as the offense when having found its rhythm can be as good as any within the league .

Now would it be remiss to suggest that the Atlanta Falcons are not good enough to be considered amongst the NFC favorites for the Superbowl ? I think that perhaps not given that no one could really have foreseen the Green Bay Packers coming out of the NFC as conference champions much less wining the title itself . If anything all eyes were perhaps on the New Orleans Saint or Chicago Bears from last year as it related to the postseason. I read with interest where a fellow blogger within this medium suggested that the next young quarterback within the league who is on the cusp of leading a team and actually winning the Superbowl will be the Bears’ Jay Cutler . Yes the that Jay Cutler who essentially baulked and walked away from his team when they needed him most . For all of Brian Urlacher’s traits , facing reality doesn’t seem to be one of those , especially in light of the player coming to his quarterback’s defense by saying that ‘…..Cutler was a warrior and one of the hardest working players in the league as well as one of the best players at the position in the entire NFL’ . Obviously Urlacher hadn’t been taking much note of what happened in the Bears’ meltdown and their subsequent 21-14 loss to the Packers much of which could be squarely placed on Jay Culter’s shoulders for the team’s demise in the NFC title game .

As to the ongoing impasse between the league and NLFPA I would certainly like to be optimistic with regard to what I have been hearing via the various news sources . But given the fact that NFL Commissioner Roger Goodell has handled this situation with about as much precision as a one armed individual being asked to juggle an explosive device . I think that it’s pretty safe to say that this episode is far from over as it relates to the present work stoppage . For all of the pontificating , finger pointing and in the end so called accord that we are now seeing from all sides with Goodell and his union counterpart DeMaurice Smith of the NFLPA issuing a joint statement focusing on the two sides close to reaching an accord , I for one won’t believe it until I hear that an agreement has been reached , a binding contract signed and we are told the league will indeed begin its regular season schedule on time . Anything short of that I will still deem to be a complete failure !

Simply chime in with a comment as to your thoughts raised within this piece and thanks as always for the continued support as it’s greatly appreciated .

Picture and slide show details below .

(3) Carolina Panthers’ Cam Newton, rear, looks on as teammate Steve Smith, center, calls a play at his youth football camp in Charlotte, N.C., Friday, June 17, 2011. It was another bonding experience for what will be one of the most scrutinized quarterback-receiver combinations in the NFL _ if Smith stays in Carolina. AP Photo/Chuck Burton ……

(4) Robert Kraft, owner of the New England Patriots, right, talks with Jerry Richardson, owner of the Carolina Panthers, as they arrive for meetings in Rosemont, Ill., Tuesday, June 21, 2011. Owners gathered to discuss the status of negotiations with the players for a new collective bargaining agreement. AP Photo/Nam Y. Huh ……

(7) Sam Shields (37_ of the Green Bay Packers intercepts the game’s final pass and runs for 32-yards to seal the 21-14 victory for the Packers against the Chicago Bears in the NFC Championship Game at Soldier Field on January 23, 2011 in Chicago, Illinois.
Photo by Andy Lyons/Getty Images North America ….

(8) Quarterback Jay Cutler (6 ) of the Chicago Bears celebrates his six-yard touchdown run with Devin Hester (23) against the Seattle Seahawks in the second quarter of the 2011 NFC divisional playoff game at Soldier Field on January 16, 2011 in Chicago, Illinois. Johnathan Daniel / Getty Images …….

(9) After a failed coaching experiment four years ago, Falcons owner Arthur Blank, left, is thrilled with the job Mike Smith, right, has done with the team. Kevin C. Cox/Getty Images …..

The Boston College  Eagles  saw fit  to fire  their football coach Jeff Jagodzinski .One could question the  temerity of the  AD  Gene De Fillippo to  fire  the  head  coach. But  he  was implicitly told  not to interview  for  the  vacant  head coaching position with the  NFL’s  New York Jets.

And  as much  as one could  view this  a restraint  of  trade.  The AD  was  quite  within  his rights to act in such a way. But what ought one  to  make  of  Jagodzinki’s own desire to coach within the  NFL.  It’s every  college coach’s  ambition  to aspire  to  coach in the professional ranks.  As it now stands  the  Jets  are  still in their  search  process  for  what  they deem to be  the  right candidate.   They’re  holding  interviews   but  as  of  yet an  official announcement  has  yet  to be  made.    With the fallout that  has taken  place  since the abrupt firing  of   Eric Mangini and  the  apparent  abrupt end  to their  season.   One can only  surmise  that  the Brett Favre  saga ,  trials and  tribulations  may  well  be over  with the  franchise.   He’s stated that  it  is  his  intention  to  think  over  his  decision  carefully.    If  it’s  anything  like  those of  the  past  concerning   his  on  and  off   decision  making  as  to  his  career.  We  may   well  be  in  for  the  sort  of  idiocy  not  seen   Gov Sarah  Palin sought  to  allay  us  with the  fact that  she was  ready  to  serve  as  Sen. John McCain’s  vice  Presidential  running  mate  when seeking  the  presidency. 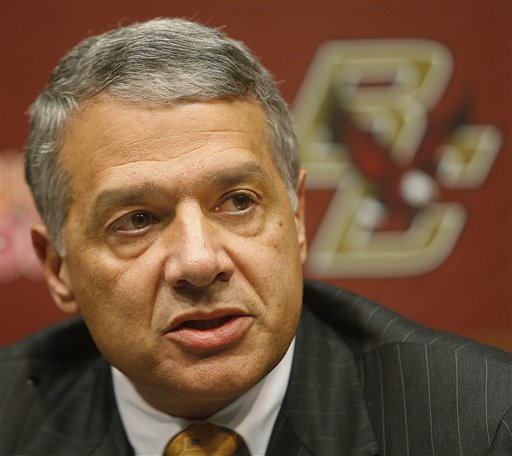 Boston College  AD Gene DeFillippo makes the announcement  that  head  coach Jeff  Jagodzinski had  been fired after the  coach  interviewed for  the  vacant  head  coach’s position with the New York Jets.  DeFillippo  had warned  his  coach  that in  seeking  the  position  he  would  be  fired  with  cause. picture appears courtesy of ap/photo/ Steve  Savoia …………………………..

As to Jagodzinki’s  future  it is wholeheartedly felt  that he  may  well  find  his way  back  into the  college  ranks.  From the  NFL  standpoint  it’s  hard  to  say  whether or  not he’ll be hired a franchise  within  the NFL.  Bearing  in mind  that Jagodzinski is  still  under  contract  having signed  a five year  deal  which he was just  two years into.  It  begs  the  question  where’s  the  loyalty ?   Players  have  to  sit out  a year  should  they  seek  to  leave  a Division 1-A program for  elsewhere.  No such  thing  when it  comes  to  a coach  who  eschews  such  things.  Perhaps finally  this  is the  sort  of  thing  whereby  when  you’re  obligated to a  contract you honor  it.

Jeff Jagondzinksi the now  former  coach  of the Boston College  Eagles.  Jagondzinski sought to interview  for the  vacant position  with  the  New York Jets. Having  been  warned  by the  AD that he  would  be fired  were he to  go ahead with  and interview  for the vacancy.  picture appears  courtesy of  ap/photo/ Adam  Hunger……….