Well, the winter meetings are underway and therein the MLB executives such as the general managers will gather together to discuss ‘their state of affairs’.And no doubt try to arrange several major deals amongst the desirable free agents that are liable to be on the market this winter.

At a time when all four major high profiled sports are facing a major economic crisis. Only the buffoons within MLB would try and tell you the exact opposite to what’s happening out there. Simply put, Bud Selig and Bob DuPuy are about as cognizant as to what’s happening in the game of baseball, as Stevie Wonder would be, in a darkened room filled with several poisonous snakes. Suffice to say, that if they were bitten, they still wouldn’t get it and that’s how idiotic both of these individuals happen to be ! And along with them following suit ,are the owners in tow, along with the bumbling entity that calls itself the Major League Baseball Players’ Union, otherwise known as the MLBPA.

The 2009 World Series champions set their 2010 budget parameters during the third day of organizational meetings on Friday.

“Now we’ll go out trying to execute some game plans,” Cashman said. “We have our priorities and we’ll starting working through the winter.”

New York signed free agent pitchers CC Sabathia(notes) and A.J. Burnett(notes), and first baseman Mark Teixeira(notes) during the 2008 offseason. Cashman said there are not as many glaring needs this year, but added the Yankees are “not the perfect beast, either.”

“Thankfully we have a lot of answers already on our roster, but there’s still areas of need that we need to address,” Cashman said.

“I’ll talk with all the agents involved, as well as the other agents on the rest of the free agent market and at the end on the trade market,” Cashman said.

Outside free agents like outfielder Matt Holliday(notes) and pitcher John Lackey(notes) could get some consideration during baseball’s winter meetings next week.

“We’ll meet with agents, meet with clubs,” Cashman said. “You never know what will materialize.”

The Yankees are also expected to monitor the trade status of Toronto ace Roy Halladay(notes).

Senior vice president of baseball operations Mark Newman, who oversees player development, spent an hour during the final day of meetings Friday with Cashman and other high-level team officials at the Yankees spring training complex.

Now if there was a warning sign for the game of baseball to heed , then it had to have been when on the cusp of the beginning of last season. When the New York Yankees once again entered the fray and spent over $423 million to secure the services of Mark Teixeira, A. J. Burnett and C.C. Sabathia on their way to securing their 27th World Series title, with a six game series’ win over the Philadelphia Phillies in their showcase event of ‘The Fall’. Hitherto, uber-agent,Scott Boras and several of his colleagues were extremely happy with the course of events that unfolded with regard to these signings. Now come full circle and players such as Roy Halladay of the Toronto Blue Jays ,Jason Bay of the Boston Red Sox and the St Louis Cardinals, Matt Holliday are amongst the most desirable players that are liable to be on the market this winter. Of the triumvirate mentioned, only Halladay isn’t a free agent. Although it’ll take a great deal to pry away the player from the Blue Jays, as they’re no doubt seeking the most desirable value possible in terms of replacing their ace pitcher.

It’d appear that the premium prices will once again abound this off-season if the comments by Boras are anything to go by. It is his belief, that the game is as healthy as it’s ever been. As to how he comes by this notion is anyone’s guess. But bear in mind, what Scott Boras wants, is nothing more than getting the best possible deal for his client or clients as the case maybe. That way his commission remains above the norm, in terms of services rendered on behalf of his client. Selig , as commissioner of baseball and Bob DuPy as the game’s Chief Executive Officer, merely sit and aside and watch things unravel infront of their very eyes. Never mind the fact that many of the mid and small market clubs are now struggling to make ends meet. Granted, MLB at present has what it calls a ‘luxury tax’ that in essence is nothing more than a way to penalize clubs such as the Yankees and the other large market teams, who are able to avail themselves of the best talent available by plundering the rosters of other teams within MLB, as they see fit. Be it through free agency or via a trade. Selig and his minions would have you believe that this is best and only way to keep the game on an even keel and as a viable healthy option. In many respects it’s no different from the somewhat asinine format the federal government took in bailing out the financial and automotive industries without any real guarantees in return. Selig, informs us that the recipients of this particular revenue streams, has to use the monies to bolster their rosters. But more often than not .that money is being used to do precisely the opposite. It actually finds its way into the pockets of the owners , who then offer no explanation to the fans, who have to endure the abject futility of those teams and their on the field performances.

Funnily enough, an ardent Oakland Athletics’ fan has tried to suggest that his team is always and has always been competitive. Well, if one counts that having the management and ownership year in and year out, simply either trade away their best players or simply allow them to leave as being competitive. I’d hate to think what he’d define success as being ? Suffice to say that the A’s , much like the rest of the ‘bottom feeders’ within major league baseball are now part of what I’d like to call the haves and have nots. The A’s and other teams in the same tract aren’t liable to be able to compete with the financial behemoths of the game such as the Yankees, Red Sox , New York Mets ,Philadelphia Phillies, and the Los Angeles Angels. Who year in, year out, are part of the mix, when it comes to postseason aspirations. Albeit , that as of late the Mets and its ownership have been about worldly wise in terms of common sense . As was shown by Sarah Palin and her high profiled interviews with CBS news’ anchor person, Katie Couric. Let’s just say, the faux-pas made by both the Mets and Palin, has been of the highest comedic order, thought possible !

Chicago (SI.com) — Bud Selig plans to step down as commissioner of Major League Baseball when his current contract expires on Dec. 31, 2012, according to a report in the Chicago Tribune.

The 75-year-old Selig, who has been commissioner since 1998, declined a request from a group of five MLB owners to stay on beyond that time, the newspaper reported Saturday, citing unnamed sources. He reportedly told the owners he would step aside then because he had other things he wanted to do, such as teaching and writing a book.

His time in office has included such events as the players’ strike in 1994, the introduction of the wild-card system and inter-league play, and investigations into steroid use. He received a three-year contract extension last year.

And the fans and press alike await with baited breath as to what will surface from these meetings. I can’t help but wonder who in reality the game of baseball really thinks it is now fooling ! Selig and the entire cabal within the game seem to be oblivious as to what’s now happening around them. And it will end in their own self inflicted wounds and implosion , if they’re not prepared to face the acute problems that have already begun to encapsulate the sport. From the ‘steroid issue’ to the distrust between the game’s hierarchy and the MLPA. To that, of the mere fact, that they refuse to address the severe financial plight of the vast majority of the teams within baseball. 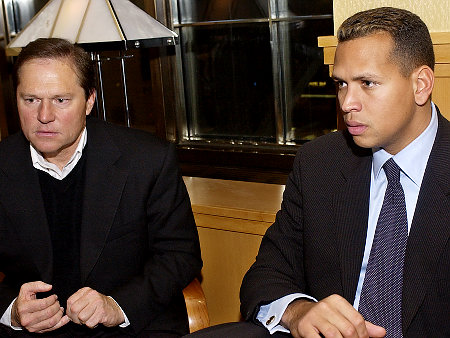 Uber-sports agent, Scott Boras , seen here alongside perhaps his most recognizable client , that of Yankees’ All Star slugger and 3rd baseman, Alex Rodriguez. Boras also represents several major league stars in the game ,such as , Barry Zito, Manny Ramirez, Daisuke Matsuzaka, Johnny Damon, Mark Teixeira, C.C. Sabathia and Manny Ramirez , to name but a few. However, we repeatedly hear of general managers around the league complain that Boras and his negotiating tactics, have been underhanded and duplicitous in driving up the asking price of his clients during the negotiation process. But needless to say, repeatedly they’ll ‘cave’ in to his demands and finally acquiesce. picture appears courtesy of ap/photo/Keith Willens …….

Needless to say, it’s not only the lunatic fringe within the game but the erstwhile observers outside the game such as the baseball writers who march the goose step alongside Selig and his minions. And who in essence have refused to even report many of the problems that have been rife within the sport over the last decade, at least. The lunatic fringe and the lunatics are running the game of baseball. And no one within seems to be of the mindset to even care about its well being.