Thanks But No Thanks ! It’s The NFL For Me !

The NFL season kicks off tonight with a lively NFC — game between the last two Superbowl champions , with the Green Bay Packers hosting the New Orleans Saints at Lambeau Field in Green Bay , Wisconsin . All of the hoopla , pomp and pride expected , will be regaled upon the nation and fans in attendance . With the tenth anniversary of the “9/11” about to be commemorated this apart from being a sporting event will also be a somber and reflective point of time for the nation at large .

Slide show gallery for your perusal .

It seems hard to believe that a decade has come and gone in the blink of an eye with the coalition forces still fighting a war on two fronts in Afghanistan and Iraq but if we are to live in a much safer world then the nation’s enemies must be defeated ! 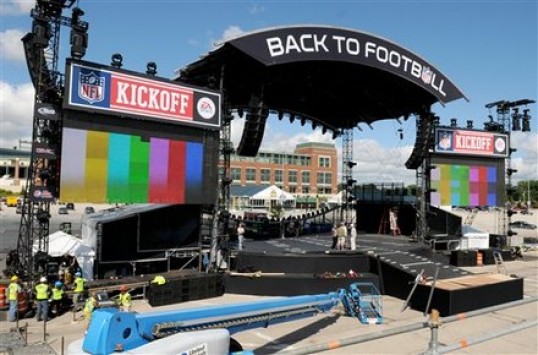 I certainly believe that this game will give us a pointer as to the desires of both teams . There’s no denying that both Aaron Rodgers and his opposite counterpart Drew Brees will be yearning to lead their respective rosters in seeking that initial first season win. Certainly Packers’ coach Mike McCarthy and his coaching staff having prepared the team during their preseason wants to come flying out of the gate and showing the rest of the league that the Green Bay Packers are looking to successfully defend their crown. Sean Payton for that matter is likely to feel the same way about the ambitions of his New Orleans Saints’ team as they look place themselves amongst the viable NFC contenders this season .

In what’s sure to be a raucous crowd at Lambeau Field cheering on the Green Bay Packers and the game being televised on prime-time television by NBC this is perhaps a great way to open up the season. Mike McCarthy during the offeseaon made the moves sought to bolster the organization’s ambitions through the draft and via free agency . Though based on the team’s performances of last season it’s hard to see how they could be faltered for even wanting to make what they believe are necessary changes. And even the Packers’ foray into the postseason was simply one of a team believing in itself , adapting to the environment and the challenges placed in front of them .

That justification for the Packers was borne out in their defeat (31-25) of the Pittsburgh Steelers in Superbowl XLV (SB 45 ) . Aaron Rodgers was named the MVP of the game and therein laid waste to the claim that he was simply not good enough to succeed his predecessor Brett Favre or to lead the team to a Superbowl triumph . It wouldn’t be remiss to suggest that Favre the long beloved hero in Green Bay may well be now something of a distant memory for the fans within the city. But such are the vagaries of the NFL then even when you’ve reached the ultimate heights within the game you can easily be forgotten when your last moments with an organization is to seemingly act like a petulant child who has been rebuked for behaving badly .

For Sean Payton and the New Orleans Saints after being unceremoniously dumped out of the playoffs last season it has to be said that I started to consider this team to be one and done ! As prolific as the offense was said to be over the course of the regular season you simply had the feeling that somehow they would come up short . And that was sorely pointed out when they fell by the wayside in their wildcard round —- loss (41-36) to the Seattle Seahawks .

The roster some might say was purged with the loss of Reggie Bush and others . The running back was traded to the Miami Dolphins —— some might feel that it wasn’t that big of a loss considering the player’s proclivities off the field and the fact he may well have lost the respect of some of his former teammates . But GM Mickey Loomis in line with the thinking of the coach saw fit to draft players whom he felt would be able to contribute to this team . Amongst the players drafted by the New Orleans Saints were Mark Ingram , Heisman Trophy winning running back out of Alabama . Joining Ingram also , are Jordan Cameron , Martez Wilson , Johnny Patrick , Greg Romeus and Nate Bussey . All viewed as players who’ll no doubt be able to offer something to the organization .

As I alluded to earlier within this piece the Saints’ offense is as potent as any within the NFL . The team’s depth within that category says a great deal and the figures put up by the players says a great deal as mindset of Sean Payton and in particular offensive coordinator Pete Carmichael Jr . Most certainly the team will be looking for another productive season from Marques Colston , Lance Moore , Robert Meachem amongst the team’s receving corps to complement the running game that will be provided by Ingram , Chris Taylor and Darren Sproles amongst others .

It is hoped tonight that this game showcases the very best that the NFL has to offer the fans and public at large . If nothing else , going into the weekend’s scheduled series of games we can only feast on the delights of the match-ups games themselves and at the same time solemnly remember those lost in the senseless events of 9/11. My sincerest hope is to commemorate this anniversary with the utmost respect that it deserves but also for all of the fans to celebrate the return of the NFL after a needless drawn-out and protracted stoppage .

What if anything will you be looking forward to from tonight’s game and also with regard to the weekend’s NFL schedule ? By all means do leave a comment as to your thoughts and anything else you feel may well be pertinent to the subject matter . Thanks as always , for the continued support as it is greatly appreciated !.

Picture and slide show details below .

(5) INDIANAPOLIS, IN – AUGUST 26: Aaron Rodgers (12) of the Green Bay Packers calls a play at the line during the first half of an NFL preseason game against the Indianapolis Colts at Lucas Oil Stadium on August 26, 2011 in Indianapolis, Indiana. Photo by Joe Robbins/Getty Images ……

(7) Head Coach Sean Payton of the New Orleans Saints looks on as his team plays the Tennessee Titans during their pre season game at Louisiana Superdome on September 1, 2011 in New Orleans, Louisiana Photo by Sean Gardner/ Getty Images …….