It’s Football The Gift That Keeps On Giving …. Dependent Upon What You Like ……………..

Week three of the NFL season and suffice to say the league is up and running with a number of teams all vying supremacy within their divisions and respective conferences . Already injuries seemed to played a dubious part to the start of the season for a a number of franchises and nowhere has this been more felt than with the Indianapolis Colts and St Louis Rams . The Colts have lost their quarterback Peyton Manning quite possibly for team’s entire season . In the case of the St Louis Rams it has been their losses though less acute but never the less with a team aspiring to take the next step up the ladder to be viewed as a legitimate Superbowl contender .

Slide show for your perusal .

The coaching staff and Colts’ front office are no doubt hoping that Manning can make a return at some point in the season but it would appear that the likelihood of that happening won’t happen until perhaps week 12 or 15 at the earliest . And that would be under the premise that the team is in with the chance of making the postseason . Manning’s replacement Kerry Collins having been signed by the organization has struggled to make his presence felt and that of this team playing with its usual aplomb. Having started the season at 0-2 within the AFC South the Colts find themselves rooted at the bottom of the division with the Houston Texans seeking to take advantage of the situation . As to whether or not Gary Kubiak’s — team can prove themselves worthy of the gift placed within their midst remains to be seen at this juncture .

As an avid New England Patriots’ fan the team’s — match-up against divisional rivals the Buffalo Bills promises to be one of the more riveting game within the NFL . And bear in mind this is a game between two unbeaten teams , one of this franchises will endure their first loss of the season. Ryan Fitzpatrick has proven to be the leader many felt that he might could not be but herein lies the caveat the Bills seem to be proving that last season was something of an aberation . The Bills’ quarterback and this team has proven to be one of the more pleasant surprises of the schedule so far with their aggressive play.

Chan Gailey may have done enough to secure his job for the present because as we all know the NFL season is a long an arduous one filled with highs and a great many lows . I am sure that the Bills’ coach , his staff and team will witness that as their season begins to unfold .

Bill Belichick and Tom Brady are no doubt looking carry on where they left off after the team’s stellar display in their defeat of the Miami Dolphins . The Patriots will be without their one of their more potent offensive weapons with Aaron Hernandez having sustained an injury that will keep him out of this weekend’s game. The tight end just happens to be one of Brady’s favorite weapons in his arsenal of productive artillery and Hernandez has proven to be one of the most productive players at the position within the NFL at present .

It would be remiss to think that the New England Patriots have been solely about offense but the team has come flying out of the gates laying waste to their opponents . And as I alluded to earlier the season is a long one filled with potholes that can simply become an even bigger obstacles for the team who simply are not prepared for the long haul.

With the college football season having kicked off with its auspicious start week four promises the fans something special . For the UCLA Bruins under Rick Neuheisel this happens to be a season where everything might just be on the line for the coach . Certainly if he cannot make this team — competitive over the course of their schedule and be viewed as a legitimate contender for the PAC 12 title then we may well see the beleaguered coach given his marching orders. Granted , the boasting and bragging by Neuheisel that there is just more than one collegiate team within the city of Los Angeles means nothing when you can’t dethrone that rival when called upon to do so. And that has clearly been the case for Rick Neuheisel’s team over the last few years . The playing field may well now have been leveled with the sanctions levied against the USC Trojans . But you may well be hard pressed to think that will be enough to derail Lane Kiffin’s — team as they seek to show the world that in spite of the NCAA probation and punishment meted out this is a program the coach , his coaching staff and AD Pat Haden would like to see continue in a similar vein on the field of play. 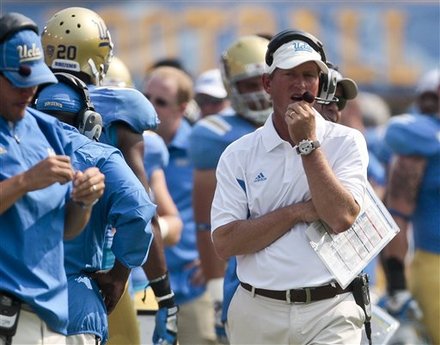 UCLA head coach Rick Neuheisel, right, talks into his headset during the second half of an NCAA college football game against Texas, Saturday, Sept. 17, 2011, at the Rose Bowl in Pasadena, Calif. Texas won 49-20. (AP Photo/Bret Hartman)

Neuheisel’s career has been well chronicled and it goes without saying that controversy has followed the coach much of it of his own making . And when that comes into being then so does that coach’s integrity. Let us just say that Rick Neuheisel has been such a man albeit that he has tried to shed that persona in order to prove he is still a capable coach . I have never followed Bruins’ football with any great interest as it has been the mens’ basketball program that has brought about the success of this establishment under the achievements of John Wooden . His feats and that of the players under his tutelage are part of collegiate basketball folklore with multiple national championships and that now heralded consecutive win streak now surpassed by Geno Auriemma’s Lady U Conn Huskies .

UCLA for their part at 1-2 are not looking to good in being thought of as a contender within the PAC 12 and this weekend presents a tough task as they face Oregon State in Corvallis , Oregon in what’s surely to be viewed as a “must win” game for the Bruins . Rick Neuheisel and his coaching assistants know that they must have this team well prepared if they are to have any hope of winning . Oregon State are unlikely to treat this game lightly, as they have something to prove ins showing that they are worthy to be mentioned in the same breath as their instate rivals Oregon ( Ducks) . Whether or not the Beavers can be viewed as worthy challengers to the Ducks remains to be seen . Mike Riley is sure the have his team ready to face the challenge of whatever is thrown their way courtesy of the UCLA Bruins . 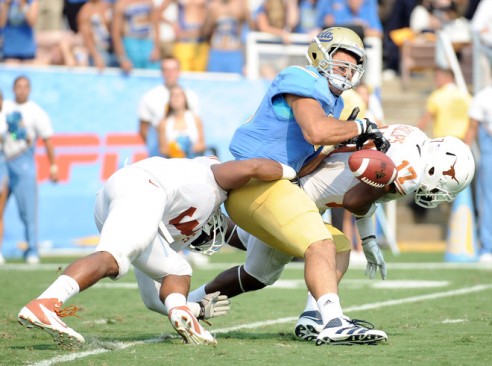 Joseph Fauria (8) of the UCLA Bruins fumbles the ball as he is hit by Adrian Phillips (17) and Jordan Hicks (3) of the Texas Longhorns during the fourth quarter at Rose Bowl on September 17, 2011 in Pasadena, California. Photo by Harry How/Getty Images …….

In suffering a humiliating 49-20 loss to the Texas Longhorns in Pasadena , California you could clearly see the many flaws on this Bruins’ team. It will be incumbent upon players such as Richard Brehaut , Johnathan Franklin , Derrick Coleman , Joseph Fauria , Sheldon Price , Tony Dye and the rest of this roster to prove their mettle against Oregon State in Corvallis this Saturday. As these players are looked upon as the likely leaders on this Bruins’ team. If they can acquit themselves by showing the leadership skills and maturity sought then this game is likely to be a close one , however , if that’s not the case then look for Oregon State to steamroll their way to a decisive victory .

At this point of both seasons within College Football and the NFL the teams have their aspirations as to how they would like to see their year culminate . For the fans it is no different , as they throw their support behind the respective programs at the D1 Level and that of the franchises within the professional ranks . As an avowed fan of both disciplines I am merely hoping that the entertainment proffered up is exhilarating to say the very least . Anything beyond that would be viewed as an added bonus but who can say how things are likely to turn out ? Within the FBS and NFL , what if anything are you most looking forward to in terms of the match ups on offer ? Simply leave a comment on your thoughts on the salients points of this article and anything else you feel is of relevance . Thanks as always for the continued support as it is greatly appreciated !

Picture and slide show details below.

(1) This Sept. 18, 2011 file photo shows Indianapolis Colts quarterback Kerry Collins making a call over center Jeff Saturday in the first quarter of an NFL football game against the Cleveland Browns, in Indianapolis. Without Peyton Manning spending 30 seconds pointing and shouting at the line of scrimmage before each play, the Steelers say they should have plenty of time on their hands. AP Photo/Michael Conroy …..

(2) INDIANAPOLIS, IN – SEPTEMBER 18: Kerry Collins (5) of the Indianapolis Colts is sacked by Ahtyba Rubin (71) of the Cleveland Browns at Lucas Oil Stadium on September 18, 2011 in Indianapolis, Indiana. Photo by Scott Boehm/Getty Images ………

(3) Tom Brady (12) of the New England Patriots looks for an open man against the San Diego Chargers in the second half at Gillette Stadium on September 18, 2011 in Foxboro, Massachusetts. Photo by Jim Rogash/Getty Images ……..

(4) FOXBORO, MA – SEPTEMBER 18: Julian Edelman (11) of the New England Patriots gains yardage during a game with the San Diego Chargers at Gillette Stadium on September 18, 2011 in Foxboro, Massachusetts. Photo by Jim Rogash/Getty Images ……

(6) D.J. Grant (18) of the Texas Longhorns makes a catch and run in front of Tony Dye (6) and Sean Westgate ( 11) of the UCLA Bruins during the second quarter at Rose Bowl on September 17, 2011 in Pasadena, California. Photo by Harry How/Getty Images …….

(8) UCLA head coach Rick Neuheisel, right, talks into his headset during the second half of an NCAA college football game against Texas, Saturday, Sept. 17, 2011, at the Rose Bowl in Pasadena, Calif. Texas won 49-20. AP Photo/Bret Hartman …..

(9) Derrick Coleman (33) of the UCLA Bruins scores a touchdwon to trail 35-20 to the Texas Longhorns during the third quarter at Rose Bowl on September 17, 2011 in Pasadena, California. Texas won 49-20. Photo by Harry How/Getty Images ……